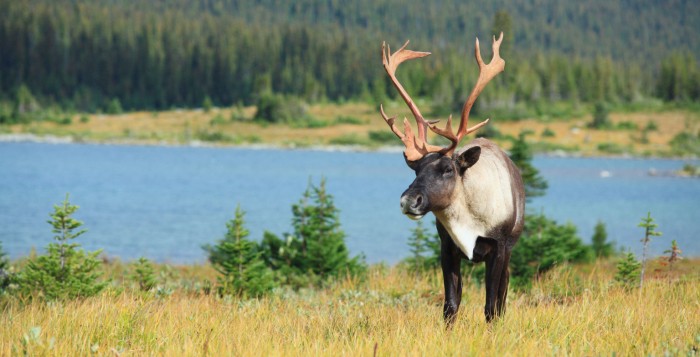 Addressing the conservation of woodland caribou in Canada: A work in progress
Woodland caribou is an emblematic species of the boreal forest. It is such a national symbol in Canada that it is featured on the 25 cents piece and has been for decades. Due to the observed decline of populations of woodland caribou over several years of monitoring in several regions in Canada, the species was added to the Canadian government’s list of threatened species in 2002 . Since that time, the country’s provinces, First Nations, communities and the forest products industry have collaborated to take action for the long-term recovery and survival of this noble creature.

Three quarters of the caribou’s territory has already been safeguarded

Caribou, Predators and Habitat Change
Caribou protect themselves from predators, such as wolves, coyotes and bears, by spreading out over large areas of land. While you might find two to three moose per square kilometer (250 acres) in the boreal, you’ll generally find just one to two caribou per tract of 100 square kilometers (25,000 acres).

This strategy of spreading the population over vast regions makes it much less likely that a caribou will encounter a predator, which allows the species to grow and propagate without having to constantly be on the lookout to avoid or escape being hunted. In many cases, caribou fall victim to wolves, coyotes and bears who are actually hunting for bigger game, like moose. Woodland caribou, unlike their tundra dwelling relatives, don’t assemble in large herds that make it easy for wolves to hunt. In addition, because of their smaller size, compared to moose, they don’t offer as much of a meal when they do happen to be caught.

When tracts of forest are harvested, low vegetation, herbs and new trees quickly colonize the fertile and newly open area. This type of ground cover provides a rich and abundant source of forage, which attracts several herbivores species, such as moose. As a consequence of the influx of moose, wolves, coyotes and bears also find their way to the area in order to hunt. As the number of predators increases, the likelihood of one of them running into a caribou also goes up, which eventually leads to reduced caribou populations.

Resolute protects land to increase caribou habitat
In order to ensure that caribou habitat remains safe and abundant well into the future, Resolute is promoting forest management practices that target large tracts of land while leaving sufficient forested areas to meet the caribou’s habitat requirements. The areas identified for caribou conservation must be large enough to allow caribou to rely on their dispersion strategy to reduce encounters with predators. In addition to this approach, we have also supported several initiatives to set aside additional territory, some of which are currently under discussion as part of the Canadian Boreal Forest Agreement (CBFA).

Up to now, Resolute has made the following contributions in land toward the conservation of woodland caribou habitat:

Safeguarding caribou with sound management
With over 75% of the caribou range located north of the managed forest, we rely on numerous strategies, best practices and guidelines developed specifically for caribou conservation to provide suitable habitat for woodland caribou within the 25% of the range that falls in the managed forest. Ontario’s Caribou Conservation Plan is one example of a government guideline supporting caribou sustainability. These strategies, which are built into our forest management plans, focus on providing habitat for caribou across the landscape on a long-term basis, and minimizing disturbances to caribou populations by using the following guidelines:

The 150-Year Plan
Perhaps the most widespread approach to harvesting, is known as a “dynamic caribou habitat scheduling,” where areas in which an optimal harvesting sequence can be carried out over a span of 100 to 150 years are identified, so that suitable caribou habitat is constantly maintained in a caribou population range. By applying this technique, large areas of suitable habitat are continuously maintained for caribou across the landscape. These caribou “deferrals” move over in the region where and when previously harvested areas have acquired the desirable caribou habitat attributes. It is only when the caribou have other areas in which to safely move, that those previously deferred areas can be harvested. This approach concentrates harvest operations in defined areas, in order to minimize disturbance levels at any given time for caribou populations across the broader range of the species.

Looking Forward
Resolute has clearly expressed its commitment to sustaining woodland caribou populations with a combination of sustainable forest management practices, conservation of caribou habitat and the application of dynamic habitat scheduling in harvested areas to minimize disturbance and maintain sufficient caribou habitat across the landscape. Our company will continue to prioritize the conservation of this noble creature and national symbol well into the future, while also seeking additional partners and innovative approaches to further benefit woodland caribou populations across Canada.

Sep 13, 2013
0 23643
As a Canadian-based company with a long heritage in the boreal forest, we embrace our responsibility to preserve and renew the natural resources in...