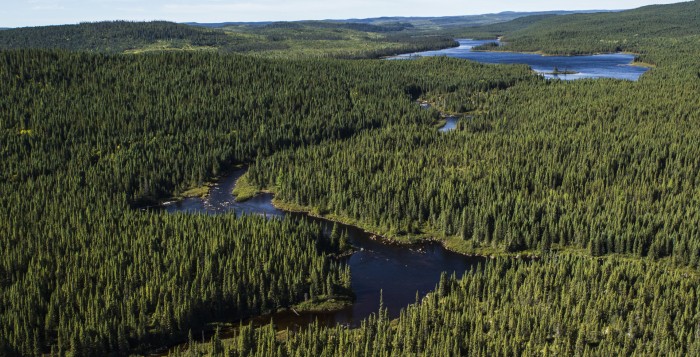 Canada’s boreal region covers almost 60 percent of the country’s land area, essentially spanning from the Atlantic to the Pacific. At 2,000,000 mi², (over 5,740,000 km²), it is one of the largest and most complex ecosystems on the planet.

The boreal forest is fantastically diverse and complex. An ecosystem of lakes and wetlands moderates the climate, produces oxygen and purifies the water supply for its inhabitants. Much of the world’s freshwater is in the boreal’s lakes, rivers and streams. More than 208 billion tons of carbon are stored in the boreal’s trees, soils, water and peat, meaning that the forest has a significant impact on the planet’s ability to regulate the levels of carbon in the atmosphere.

According to Natural Resources Canada, “Canada’s boreal forest is often portrayed as one vast tract of ancient, pristine wilderness but this isn’t the case. Although the boreal region itself is ancient, the boreal forest is made up mostly of trees that are relatively young compared with many that grow in more temperate climates. It is regularly affected by forest fires, insects and other natural disturbances, but continually renews itself through these natural disturbances.”

The boreal forest is one of the great wonders of the natural world. It spans much of the Northern Hemisphere, from North America and Asia to parts of Europe, and is considered public land. The forest is home to unique plants, animals and human cultures that have coexisted for thousands of years. Those of us who live and work in Canada’s boreal region consider it a critical part of our culture, economy and collective future.

Climate Change and Canada’s Boreal Forest – The Facts May Pleasantly Surprise You!

Sep 13, 2013
0 23627
As a Canadian-based company with a long heritage in the boreal forest, we embrace our responsibility to preserve and renew the natural resources in...